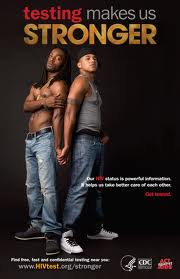 Testing Makes Us Stronger is a national campaign with a special focus in six initial key U.S. cities where black gay and bisexual men are heavily affected by HIV: Atlanta, Baltimore, Houston, New York, Oakland and Washington D.C. Outreach activities and events are being scheduled in each city, and the campaign will also visit Black Pride events across the country.

BMX-DC supports this campaign and has partner with Testing Makes Us Stronger is a part of Act Against AIDS, CDC’s 5-year, multi-faceted national communication campaign to fight the HIV/AIDS crisis in the United States. Act Against AIDS focuses on raising HIV awareness among all persons living in the United States and reducing the risk of infection among the hardest-hit populations. The multiple campaign phases use mass media (TV, radio, newspapers, billboard advertisements, magazines, the Internet and other communication channels) to deliver important HIV prevention messages. To learn more about Act Against AIDS, visit www.cdc.gov/actagainstaids.