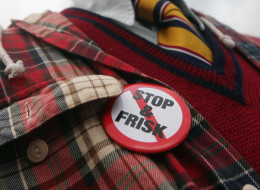 It’s a story Nicholas Peart has told many times. On his 18th birthday, he walked to a Brooklyn McDonald’s with his cousin and a friend. The McDonald’s was closed, so the trio sat down on a nearby bench and shot the breeze. They weren’t drinking, they weren’t smoking weed. They were just enjoying the summer night. Suddenly, three NYPD squad cars surrounded them, and an officer yelled at them to “get to the ground!”

They obeyed. That’s when an officer, gun pointed at Peart, allegedly rooted through Peart’s pockets, pulled out his wallet, then pulled out his ID. “Happy birthday,” the cop quipped.

It was that incident — along with nine other times he says cops stopped and searched him for no reason — that spurred Peart, now 25, to join the class-action lawsuit against the police department’s use of stop, question and frisk. In 2011, the NYPD stopped New Yorkers nearly 700,000 times, and 87 percent of those stopped were black or Latino.

Last summer, Judge Shira Scheindlin delivered a landmark decision in that class-action lawsuit, Floyd vs. The City of New York. She ruled that the department’s use of the controversial tactic was unconstitutional, and amounted to an “indirect policy of racial profiling.” She ordered a federal monitor to oversee the NYPD, and also ordered a slew of other remedies, including a “joint remedial process” in which the plaintiffs and advocacy groups would have to work together to repair police-community relations, and a pilot program for putting body cameras on cops.

A series of legal maneuvers from the city’s police unions, however, have stalled the implementation of these remedies.

“It’s important that the remedies move forward,” Peart told reporters Wednesday during a rally outside the United States Court of Appeals in Lower Manhattan, where the police unions were set to argue in the Floyd case that they should be able to intervene in the implementation of the remedies. “For too long, stop-and-frisk has been plaguing our communities, and we’re ready for change,” Peart said, flanked by members of different advocacy groups, as well as a handful of New York lawmakers.

Public Advocate Letitia James said it was time to “enact justice for communities that have been affected by stop-and-frisk abuses.”

“What we‘re fighting for today,” she continued, “is the future of the joint remedial process and stop-and-frisk reform in New York City at the center of the healing process between law enforcement and communities of color all throughout the city.”

She also said the unions’ decision to stall the Floyd ruling was really just a maneuver in ongoing contract negotiations with the city.

“I believe that this is nothing more than a ruse, an excuse for negotiations related with the labor contract which is at dispute right now with [Mayor Bill de Blasio's] administration,” she said. “I think they are using tactics to get the attention of the administration to stall any efforts at progress.”

The unions’ main objection to the Floyd decision has been that officers themselves wouldn’t be involved in the joint remedial process, but attorney Jonathan Moore told The Daily News in July that Scheindlin’s ruling “gives the unions a seat at the table.”

Pat Lynch, president of the Patrolmen’s Benevolent Association, the city’s largest police union, told The Huffington Post in a statement Wednesday that “our challenge has always been about protecting the rights and safety of our members while they work to protect our communities.”

“We have serious concerns about how these remedies will impact our members and the ability to do their jobs,” he continued. “The PBA is fighting to give voice to our members and to make every effort to ensure that their rights are protected.”

Moore, however, pointed to the fact that some cops testified against the department’s use of stop-and-frisk during the Floyd trial. “I don’t think these police unions are speaking for the majority of police officers, because the rank-and-file officers want this reform,” Moore said.

“We have a leadership in this city now that has a greater respect for civil rights,” Moore added, referring to de Blasio’s administration, “after 20 years of living in the desert under Giuliani and Bloomberg. I think there’s a new day in this city on some level, and we want a union leadership that reflects that change. And at this point all they reflect is the old way of doing things, which is, ‘Policemen can never do anything wrong.’”

“Had these reforms been implemented, it’s very likely that Eric Garner would not have died on Staten Island three months ago,” Moore continued. Garner, 47, died after police put him into a prohibited chokehold during an arrest for selling untaxed cigarettes. Moore, who now represents Garner’s family in a lawsuit against the city, said the 120th precinct in Staten Island would’ve been one of the precincts to have received body cameras as a result of the Floyd ruling.

“Had those cameras been implemented and officers been trained with them, I think it’s a fair assumption to say that they would not have acted the way they did,” Moore said. “In this case, justice delayed is not only justice denied, it’s people being killed.”

After Scheindlin’s ruling last year, Mayor Michael Bloomberg appealed the decision. An appeals court later removed Scheindlin from the case altogether, but in January of this year, de Blasio took office, dropped Bloomberg’s appeal, and used Scheindlin’s ruling as a basis for a sweeping settlement to reform the NYPD’s use of stop-and-frisk.

In July, another federal judge blocked police unions from intervening in that settlement. The unions appealed that decision, which resulted in Wednesday’s hearing before another panel of federal judges.

For Peart, however, numbers can be deceiving. “Just because the numbers are down,” he said Wednesday, “doesn’t mean it’s not happening.”