The crowd with arms in the air shouted “Hands Up! Don’t Shoot!” in front of the Robert F. Kennedy Department of Justice Building in Northwest D.C. Aug. 27.

Progressive groups and sponsors such as No Fear Coalition, CODEPINK National, the Institute of the Black World, and WPFW Radio were there to send a message in the aftermath of the Michael Brown killing.

“Michael’s murder is symptomatic of a systemic, racist culture that condones the murder and incarceration of Black boys and men at rates highly disproportionate to the general population. U.S. police or vigilantes kill a Black man every 28 hours,” said Dr. Marsha Coleman-Adebayo of No FEAR Coalition and Black Agenda Report.

A flyer was handed out to the crowd with a list of measures. The measures included the immediate arrest and prosecution of Darren Wilson and other policemen to stop the killing of Black people (particularly men and boys), the end of mass incarceration, the release of boys and men of color for minor crimes, the mitigation of the police militarization complex resonating throughout the country, and the assignment of an independent prosecutor to the Michael Brown case.

A letter was also read at the rally, which contained an action plan that was forwarded to Attorney General Eric Holder. “We need the full support of the Attorney General’s office to make sure that Michael Brown is not simply another name added to the anonymous statistics and meaningless deaths of African Americans at the mercy of a merciless system,” Adebayo said.

“I thought it was a good turnout considering the time,” Alli McCracken of CODEPINK National said. The rally began at 4 p.m. “The speakers were truly amazing. What we can do is network and create a broad-based antiracist support with more organizations after Ferguson.”

After the rally, the group marched to Busboys and Poets for a town hall meeting to continue their stance on killings of Black males. 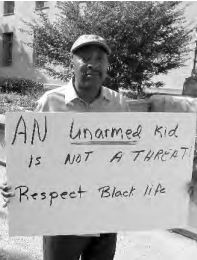 A man holds one of the many signs calling for justice.

The day before the rally a National Town Hall Meeting was held in Baltimore, Md. on the Michael Brown killing. It was televised on FOX 45 News in Baltimore and seen on Washington, D.C. station Newschannel 8.

“I think it’s a mindset problem. They think we’re less than dogs; they shoot us down in the streets. The question is why do they have a quick draw, why do they have to keep shooting us after we’re disabled,” said Frank M. Conoway, clerk of the Circuit Court in Baltimore City.

McLhinney told the audience, “I only had one hour of this training in the Baltimore Police Department in 23 years.” He stated many police officers have a “perception problem” and citizens have become an industry to meet police quotas.