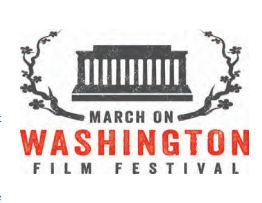 The March on Washington Film Festival has announced that it will visit the District as part of its three-city tour. From July 21 through July 29, the festival will host free screenings across the city of documentaries and scripted films that focus on under-told stories of the sacrifices and triumphs of the 1960s Civil Rights Era. Each screening will each be followed by a panel discussion, talk, or musical performance.
Festival highlights include a special preview of Freedom Summer, and screenings of Crisis: Behind a Presidential Commitment, Sam Cooke: Legend, and Nothing But a Man. Post-film panel discussions will provide opportunities to engage with local thought leaders and change-makers to ideate a platform for the future of civil rights. Just as music and art played a crucial role in inspiring and advancing the civil rights movement, the festival will include live musical performances.
The film festival originated in the summer of 2013 to commemorate the 50th anniversary of the March on Washington for Jobs and Freedom, and to encourage a new generation of civil rights activists. Over 1,000 people attended ten free screenings during the inaugural Washington, D.C. event. The interest generated by the festival led its organizers to expand to Atlanta and New York City for 2014. This years selected films focus on the events of 1964 and the theme
“Change is Gonna Come,” from Sam Cooke’s hit of that summer.
Additional details will be announced soon. For more information on the March On Washington Film Festival, please visit http://marchonwashingtonfilmfestival.org.

Come connect and break bread with the Brothers of BMX-DC and discuss their mission, purpose, and the direction of this innovative local organization. Meeting…