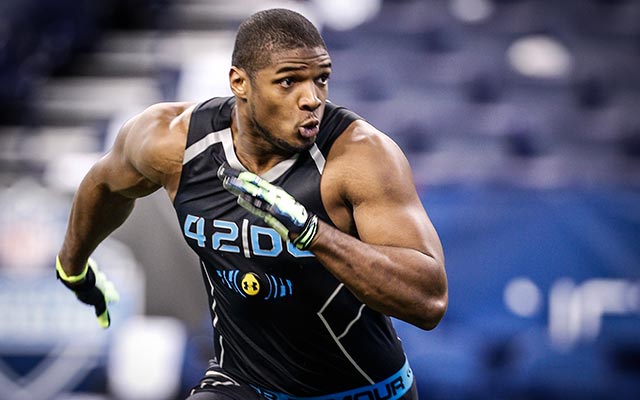 It took a while, but with the 249th overall pick of the NFL draft, the St. Louis Rams made history. Defensive end Michael Sam became the first openly gay player to be drafted in the NFL.

Sam had to wait until 6:50 p.m. Eastern time on Saturday, almost seven hours after the third day of the draft started. There were only eight picks remaining in the seventh and final round before Sam was selected. After the pick was announced, ESPN analyst and former NFL general manager Bill Polian could be heard saying, “Good for you, Michael.”

ESPN showed Sam’s reaction. He was on the phone with the Rams trying to hold it together. Then the tears came. He doubled over crying, with his boyfriend at his side. When he was done talking to the Rams, he kissed his boyfriend. That scene has been replayed thousands of times over the years in the draft. This was the first time it was happening with an openly gay player.

Sam still has a long way to go to make the ultimate history of being the NFL’s first openly gay player. Like any seventh-round pick, he’ll have a climb to make the 53-man roster. But he gets the chance after a long, stressful offseason.

Sam became one of the biggest stories in the draft when he announced in February he was gay. It became a story that went well beyond football. After a short time, the discussion turned from his sexuality to his skill as a player. The problem was that even though he was successful at Missouri, winning the co-SEC defensive player of the year award, he didn’t have a natural NFL position. He played 4-3 end in college but at 261 pounds is a bit small for that in the pros. He was a bit slow for outside linebacker in a 3-4, as well. He tried that position at the Senior Bowl and struggled. Then he went to the NFL scouting combine, and although he handled the attention marvelously, his workout wasn’t too impressive.

There was a real possibility he wouldn’t be drafted, even though that was hard to believe for a SEC defensive player of the year. Since 2003, when the SEC started giving out the defensive player of the year award, every winner before Sam except one had gone in the first 33 picks of the draft. The last seven winners were taken in the first round. Teams figured Sam was a late-round prospect at best, and who knows if his sexual orientation had anything to do with that. The NFL didn’t want to deal with the story of a man who was attempting to become the first openly gay player in the league, a player who earned  co-top defensive player in the conference honors in college football, not being drafted. It would have been a nightmare. Even if Sam wasn’t drafted only because of football reasons, the perception for the NFL, which has preached acceptance and tolerance for all its players, wouldn’t be good.

Sam was by far the most interesting story of the draft’s third day. ESPN had a camera set up at Sam’s home to record his reaction when he was picked. He looked nervous during the day, fidgeting with his phone every time they showed him. A punter (Pat O’Donnell) went in the sixth round to the Bears, before Sam. Kickers went with consecutive picks in the seventh round with Sam still on the board. Defensive linemen from Princeton, Concordia-St. Paul and Bloomsburg University went before him. Concordia-St. Paul had never had a player drafted before. Georgia State offensive lineman Ulrick John was drafted in the seventh round by the Colts, and he was so obscure NFL.com didn’t have any information on him. The same thing happened when the Dolphins drafted defensive end Terrence Fede of Marist. Yet, Sam waited.

ESPN’s analysts started discussing his chances of getting drafted near the end of the sixth round. A poll was posted on screen that said only about 40 percent of people thought Sam would be drafted. Everyone still watching perked up when the telecast threw it to the podium to announce a pick to the Jets late in the sixth, but it turned to be Clemson quarterback Tajh Boyd. The next time the broadcast went to the podium, for the Rams’ pick, it was clear that the audience was about to see some history.

The Rams saved the NFL from a very negative story by taking Sam right before the end of the draft, with one of the two compensatory picks they had late in the round. He’ll have built-in fan support as a Missouri player going to play for St. Louis, but there will be plenty of others around the country who will be watching the Rams this preseason, hoping Sam makes even more history by making the team.

Beginning July 1, the minimum wage in the District of Columbia will increase from $8.25 per hour to $9.50 per hour for all workers,…